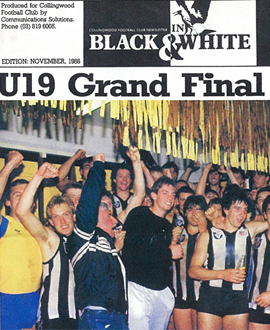 The cover of an 'In Black and White' magazine from November, 1986.

Collingwood’s under-19 teams always had the primary focus of producing footballers for the club’s senior team. But the thirds managed to win a quartet of flags along the way as well.

The first came in a one-point thriller over Geelong in 1960, and the last the now legendary 1986 success that also produced a handful of players who helped form the core of the 1990 senior Premiership team.

Thank you for submitting your feedback

Thank you for submitting your question